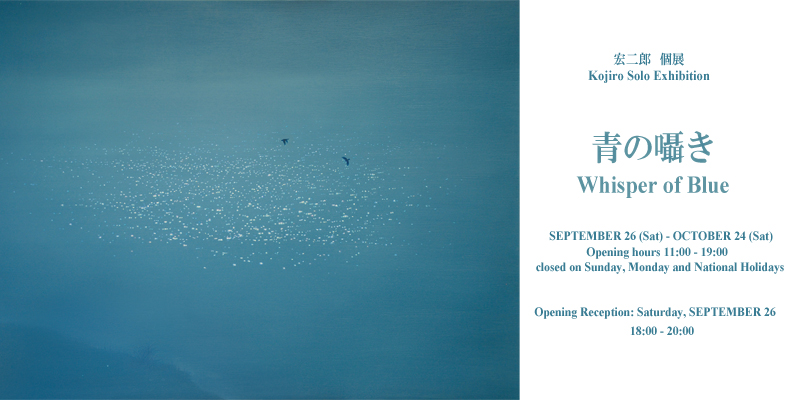 Kinosho Kikaku is honored to present to you Whisper of Blue – Kojiro Solo Exhibition, featuring series of new works that delicately portray the unique worldview of Kojiro.

Kojiro continuously searches for the ambiguous “something” that lies in between various relationships in life. The “something” that, according to him, belongs to nowhere else, yet may be the key to the true nature of the world. The searching of that something ultimately became the main motivation of the creation of his works, “In a Run-away world like today’s society, where the hybridization of values and cultures and the corruption of the relationship between human beings and Nature are constantly shaking up our existing ways of life, I constantly try to look for the meaning of why we are here, the way we exist, at this very moment.”

In contrast to the human world where everyone and everything is closely connected yet completely alienated, where miscellaneous thoughts and ideas intersect and collide, the great universe embraces each and all of us gracefully.

Some studies have found that the very first sign of life on earth might be originated in the ocean. While ultraviolet rays and charged particles pour mercilessly on earth, the ocean was the only environment that allows life’s existence under such fatal condition. Ultimately, the form of life arose from the ocean. From then on, a cascading chain of new and increasingly differentiated forms of life appeared all over the planet. Mother Earth has gradually evolved to the way we know it.

In such sense, for us human beings, the sea is like the uterus contained of warm fluid. The consciousness of self and others, the existence of justice and evil vanishes among the deep, limitless sea of peaceful blue. Kojiro believes that the color of blue is the earth and the universe. The life forms arose from the blue ocean live on within us as we are still tenderly embraced by the great universe. In other words, we are part of the ocean, our mother earth and the universe. The limitless universe that seems so distant from us, the infinite, deep sea of blue, you and me, aren’t we all tied closely with each other by an invisible bond in the abyss of the universe?

In this very exhibition, Kojiro has transformed the whisper of the blue that comes from the far-away universe and the ocean into visualized forms. We sincerely hope the echo can sublime from the vivid canvas and reach deep down into the abyss of your heart.